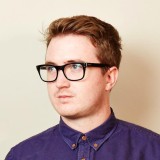 I’ve always got a side project on the go, I enjoy doing something a bit different from my usual day job and working with electronics (especially LEDs) can be pretty interesting.

Back in 2004, Daft Punk designed a coffee table for Habitat which featured a 5x5 grid of red LEDs mounted under smoked glass which would light up and animate in time with an external music source. I always wanted one of these but could never afford it. Fast forward to 2009 and a few people started building 8x8 LED matrix coffee tables. These featured 64 RGB LEDs arranged in a 8 by 8 pattern which would animate and generally look awesome. Soon after that people started adding touch sensing capabilities to tables to enable some cool interactive effects. I want to draw from all these projects and build my own ultimate LED coffee table.

Here’s a little spec I put together:

* This last feature depends on how much time I have free to program it. 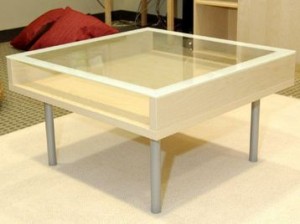 The base of the table will be formed out of an Ikea Magiker coffee table.These haven’t been on sale for the past few years but my old flatmate generously donated his for the project. They are almost the perfect size (75cm x 75xm x 45cm) but I’m still going to be making some modifications. The two open ends will be boarded up to stop light leakage and then the sides clad in clear 6mm Perspex. The Perspex will have a white vinyl backing on the inside giving it a similar effect to the first generation iPod Nano and Nintendo DS Lite. Inside the table I’m constructing a 8x8 grid out of 1mm PVC foamboard to divide up each LED and form what I’m calling a “cell”. I’ll probably replace the original glass top which has a frosted border with some low iron clear stuff which doesn’t have that usual green tint you get with glass. Where the glass sits on the wood I’m going to add a white rubber strip to form a (fairly) watertight seal, just in case a drink gets knocked over on top, I don’t want it seeping down into the electronics. The final element is the diffusion film to even out the LEDs, I’ve found some white frosted self adhesive film which works a treat.

In a RGB LED matrix, each LED is actually three combined in a single package, this means that in a 8x8 matrix there’s 192 LEDs to drive. Rather than trying to power all LEDs at once with some crazy power hungry LED driver, I’ll instead be using a multiplexing approach. This technique involves only lighting one column at a time, by switching very quickly between the columns your brain perceives that they are constantly on due to persistence of vision. I’ll be using a Rainbowduino to drive the LED array, being controlled by the main Arduino over I2C. Each cell will have three 10mm diffused RGB LEDs. The cheap Chinese LEDs which I’ve purchased, although bright, aren’t particularly high quality and the colour varies slightly between each one. By using three in a cell running at a slightly lower power I’m hoping to even out this problem (even though it means a load more soldering). It also evens out the light spread so there’s no bright spots on the diffusion film.

A capacitive or resistive panel on this scale would be too expensive for my budget so I’ve decided to go for a low tech optical solution involving infrared light. Each cell will have a IR LED and a matching IR photodiode. The LED will fire infrared light up out of the cell, if something is placed above it (a hand / cup / face), the IR light is bounced back and detected by the photodiode. At least that’s how it should work in theory. I’m expecting lot of problems with crosstalk (where adjacent cells are detecting their neighbours reflected light), reduced IR emission (due to the light diffusion film on the bottom of the glass) and interference from ambient lighting.

Each photodiode would will need to be connected to an analog pin on the Arduino to take a reading. Since the the Arduino doesn’t have 64 analog inputs I’ll be using an eight channel demultiplexer and an eight channel multiplexer to achieve this. The multiplexer supply power to one column at a time via a transistor. The demultiplexer will be connected to the photodiodes on each row. Working much like the LEDs, only one column is on at a time. This allows the demux to read each row individually, the next column is lit up and another reading taken. This happens over and over, scanning the entire table around 20 times a second.

They key to syncing lights to music is beat detection. A kick drum (which in most dance music sounds on the beat) is in the 60–120hz frequency area, by using a filter it’s possible to pull out just that frequency from an audio source and then do something when it happens. I spent a bit of time looking into active and passive low pass filters and beat detection and it turns out it’s a lot harder than first appears. Luckily I came across the MSGEQ7 chip; it takes a line level input and reports back the amplitude of seven different frequency bands. It has a built in demultiplexer so it only takes up 3 pins on the Arduino. One of the bands is 63hz which means I can do the beat detection very easily. Another positive about this approach is that I can include a graphic equaliser animation mode without needing to plug the table into a PC running a Processing sketch. I’ve bought a little pre-built board with an electret mic, built in pre-amp and gain control to feed into the MSGEQ7.

This post summarises where I’m at with the initial design of the Disco Table. I’ve started ordering parts in for the construction process. My next post will outline my progress on modifying the Ikea table and some prototype circuits I’ve built on a breadboard.